A beginner’s guide to the late Sir Ken Robinson 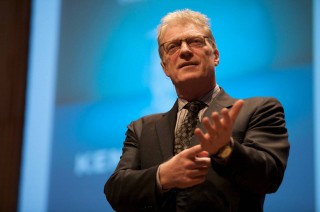 Sir Ken had the distinction of being the most-watched speaker on TED.com. To date, his four TED talks have been viewed over 66 million times, with his 2006 talk being the most viewed in TED's history. He is one of the world's leading advocates for the development of creativity and innovation in education. He argues that education programmes pupils to be good workers, rather than creative thinkers. Sadly, Sir Ken passed away on 21 August 2020, following a short battle with cancer.

Though his ideas developed over time, Sir Ken's main argument was that education should foster creativity in pupils by offering a broad curriculum and encouraging individualisation in the learning process. He believed that too much of the present education system in the UK and United States fosters conformity, compliance and standardisation rather than creative approaches to learning.

Creativity, he argued, comes from fostering curiosity through teaching that focuses on harnessing imagination rather than memorising facts. A creative education would place less emphasis on standardised tests, and instead gives teachers and schools more power to develop teaching that suits and excites their pupils.

In 1998, Sir Ken led a national commission on creativity, education and the economy for the New Labour government. The resulting 'Robinson Report' - All Our Futures: Creativity, Culture and Education - called for a national strategy for creative and cultural education, and recommended new priorities in education, including a stronger emphasis on creative and cultural education; a new balance in teaching and in the curriculum between learning knowledge and skills; and giving educators the freedom to innovate and experiment. It was globally well received, and led to Sir Ken contributing to Singapore's education strategy. His later works further developed his theories on the nature of creativity.

"Our education system has mined our minds in the way that we strip-mine the earth: for a particular commodity. And for the future, it won't serve us. We have to rethink the fundamental principles on which we're educating our children."

BBC Radio Four said that Sir Ken's "vision and expertise is sought by public and commercial organisations throughout the world". However, not everyone was so convinced. Education and teaching bloggers such as Tom Bennett cited Robinson's lack of first-hand teaching experience, and question whether someone who understands the theory, but not the practice of education, was really qualified to comment.

In his time, Sir Ken was arguably one of the most influential voices in education. His work helped inform the strategy for creative and economic development of Northern Ireland as part of the Peace Process, and he drew in global audiences for his TED talks. Robinson himself admitted that these talks don't do justice to the complexities of his theories on education, and that anyone seeking to explore the issues he covers in more depth, should also read his books, in which he lays out plans for accomplishing his vision.

Out of our minds: learning to be creative – second edition (2011)

After logging into EdCentral, visit the research section and type 'Ken Robinson' into the search engine to view content summaries, further details, links and reviews relating to his work.