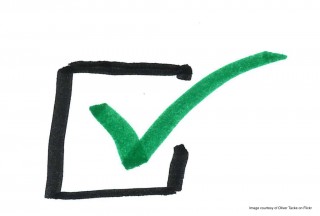 Talking at a number of conferences recently I've suggested that we've got to stop reinventing the wheel and use research wisely. Research provides signposts towards what might work for us, based on what has worked elsewhere and to what extent.

The following suggestion, improving attendance by using simple letters home with key information, is from Todd Rogers and Avi Feller and was brought our attention by Phil Brown (@ListenLeadLearn), one of the assistant headteachers at St. Mary's Catholic Academy.

What I particularly like about this approach, apart from the evidence showing a 5-10% improvement in attendance for pupils with chronic absence, is that it makes common sense. My experiences chime with the research evidence; this makes it easier to accept. We'll be up and running with these letters in the three academies within the Trust early next term. 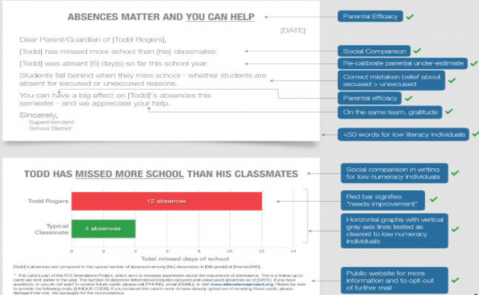 The letters are only 50 words long

Parents won't overwhelmed by them, and those with low literacy levels will be more able to easily digest the information. I think of some of the letters we have sent home in the past; too many of the parents they were targeted at would simply be unable to access them fully. The letter aims to get parents on side. The message is clear, we need to work together on this. It also addresses a key misconception of many parents about legitimate excuses for being away from school. Whether your child truants a day or was ill; s/he has missed a whole day's learning.

The bar is particularly clever

Red (for a child's excessive absences) and green (for classmates) have a simple day count scale which runs horizontally. I think this will really mean something to parents who can mistakenly think 90% attendance is really good. The comparison with classmates is much more powerful than the usual "national averages". Great teaching and learning only occurs if the pupil is actually in the class rather than absent at home.

I've no idea how many people might read this blog and use the idea within their own school. There's no special training need, it isn't hugely expensive and if successful the letter may lead to improved attendance for all the children in a family. So spread the word and let's stop reinventing the wheel!